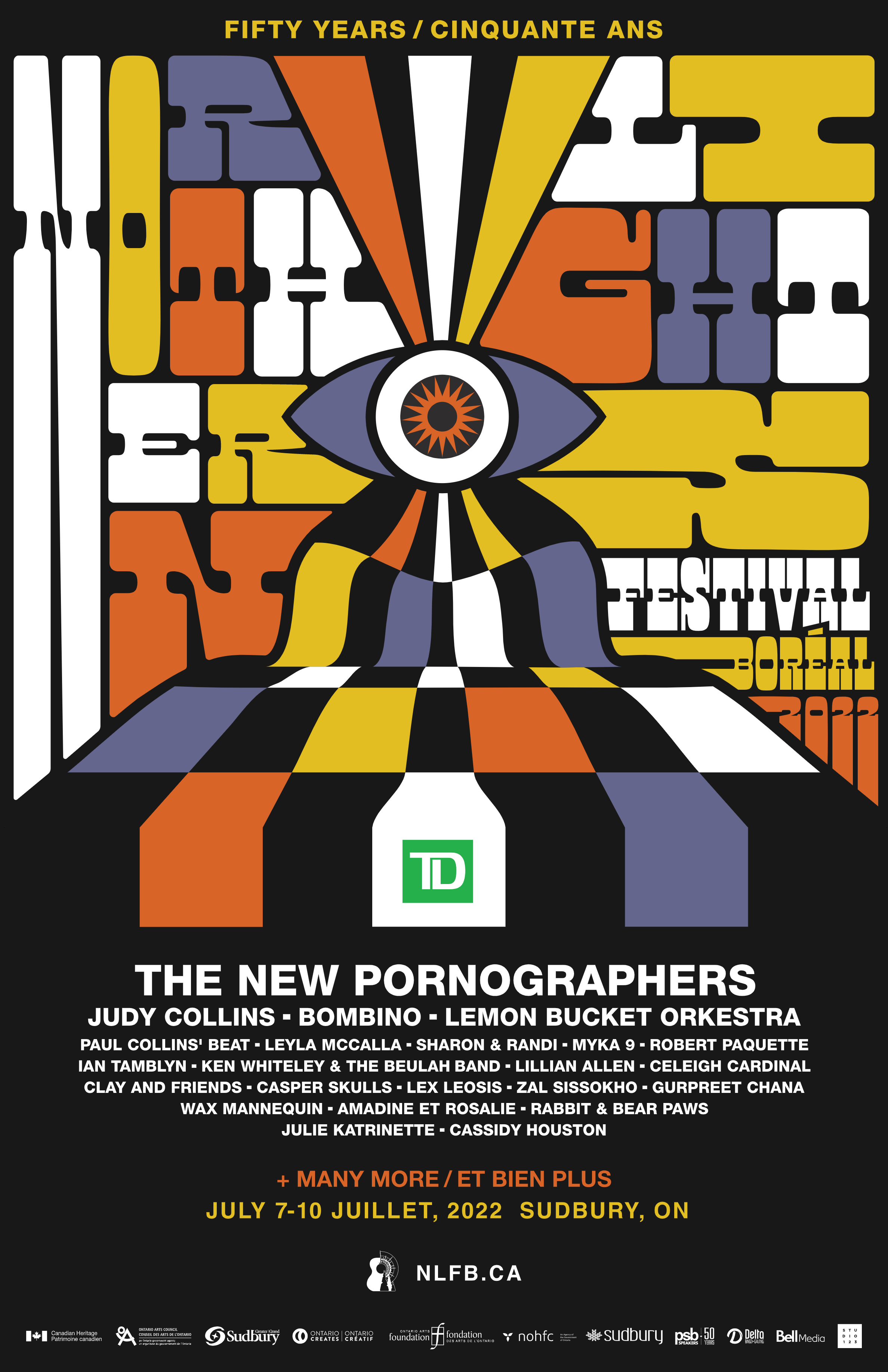 JULY 7-10 FESTIVAL TO INCLUDE: THE NEW PORNOGRAPHERS, JUDY COLLINS, BOMBINO, AND MORE

The Sudbury, ON festival began in 1972 as a single day event called the ‘Northern Lights Folk Festival’. It has grown and evolved over the years to be the signature music & arts festival of Northern Ontario. NLFB remains Canada’s longest consecutively running music festival – with a wealth of inspiring performances and compelling stories. Considering the energy that is building around the 50th anniversary edition celebration, organizers are urging festival lovers to pick up full festival passes before Monday, when prices increase, and individual All-Day Passes go on-sale on Friday.

Headlining Thursday, July 7th of the festival will be the hugely influential, indie-rock supergroup The New Pornographers.

Headlining Thursday of the festival will be the hugely influential, indie-rock supergroup The New Pornographers. Among the world’s most enduring and compelling indie rock groups, the band has released eight albums to date, including their highly acclaimed 2019 record In the Morse Code of Brake Lights. They have won and been nominated for numerous awards including the Juno Awards, the Polaris Prize, and more. They have appeared on countless ‘best of’ lists, including Rolling Stone’s ‘100 Best Albums of the Decade’. The band has also served as a springboard for many fruitful and inspiring solo careers: Neko Case, Destroyer, A.C. Newman, etc.

2019’s In the Morse Code of Brake Lights has been widely hailed as yet another breakthrough album, cementing the group’s reputation as a band that continues to innovate, exhilarate and make bold statements. There’s a deep, climatic unease running through the album’s 11 tracks, matched only by the sheer musical glee with which the band addresses the prevailing mood of the moment. It’s an album in which foreboding and bliss somehow go hand in hand—mixing founder A.C. Newman’s nearly symphonic levels of pop arrangement and harmony with a careening quality that feels unsafe at any speed. NLFB is beyond thrilled to present The New Pornographers for their first-ever appearance in the region.

Bombino is Tuareg singer and guitarist whose hypnotic electric guitar style has captivated the world. The Tuareg are a nomadic people descended from the Berbers of North Africa and for centuries have fought against colonialism and the imposition of strict Islamic rule. The Rolling Stones, Arcade Fire, and Queens of the Stone Age are all declared fans of this 2018 Grammy nominee. He has been touring the world, wowing crowds with his desert-rock sound, explosive live shows – all while beautifully expressing his Saharan culture. Dan Auerbach of The Black Keys was so blown away by Bombino’s sound, that he ended up producing his 2013 album Nomad, which debuted at #1 on the Billboard and iTunes world music charts. The most recent full album Deran, was nominated for a Grammy, making him the first Nigerian artist ever to be nominated, greeted by crowds of cheering supporters upon returning to his native country.

“Music, for me, first and foremost, was an arm for peace. In the region where we {the Tuareg} were from, we dealt with multiple hardships. The guitar became a symbol of peace; many youth fell in love with the instrument” – Bombino (Okayafrica, Jan. 10, 2019)

Collins has inspired audiences with sublime vocals, boldly vulnerable songwriting, personal life triumphs, and a firm commitment to social activism. In the 1960s, she evoked both the idealism and steely determination of a generation united against social and environmental injustices. Five decades later, her luminescent presence shines brightly as new generations bask in the glow of her iconic 50-album body of work, and heed inspiration from her spiritual discipline to thrive in the music industry for half a century.

The award-winning singer-songwriter is esteemed for her imaginative interpretations of traditional and contemporary folk standards and her own poetically poignant original compositions. Her stunning rendition of Joni Mitchell’s “Both Sides Now” from her landmark 1967 album, Wildflowers, has been entered into the Grammy Hall of Fame. Judy’s dreamy and sweetly intimate version of “Send in the Clowns,” a ballad written by Stephen Sondheim for the Broadway musical A Little Night Music, won “Song of the Year” at the 1975 Grammy Awards. She’s garnered several top-ten hits, as well as gold and platinum selling albums. In the 1960s Judy became a tastemaker within the thriving Greenwich Village folk community, bringing other singer-songwriters to a wider audience, including poet/musician Leonard Cohen, Joni Mitchell and Randy Newman. Throughout the 60s, 70s, 80s, 90s, and up to the present, she has remained a vital artist, enriching her catalog with critically acclaimed albums while balancing a robust touring schedule.

A variety of special, retrospective programming is planned for the 50th celebration, including the appearance of ‘festival favourites’ from throughout the years. In this spirit, celebrated francophone singer-songwriter Robert Paquette will make a return to the festival, having played the very first edition in 1972. Another favourite, Lillian Allen, will return – Juno winner and  internationally recognized godmother of dub lyricism, rap, and spoken word poetry. Canadian folk musician and producer Ian Tamblyn will also be at NLFB, recently appointed to the Order of Canada for his art & activism.

Paul Collins will also appear on the NLFB stages. Collins is a rock n’ roll icon, pioneer of the power-pop sound, and cult favourite, getting his start with Peter Case and Jack Lee in 1974. Their influential band The Nerves toured with The Ramones and recorded a song called “Hanging On The Telephone”, later made a hit by Blondie who covered it on their album, Parallel Lines. Collins formed The Beat in 1977, recruiting members of various rock bands to create a high energy group in the style of The Ramones, Blondie and The Dictators. Whether with Paul Collins’ Beat, or solo, Collins has continued an active and influential career touring releasing records. For this special Sudbury, ON performance Paul Collins’ band will be made up of power-pop group Dany Laj & The Looks. This exclusive show puts the Sudbury-loved rock n’ roll trio as the rhythm section for their hero and friend, live on the NLFB main stage.

Legendary Los Angeles hip-hop artist, and founder of Freestyle Fellowship, Myka 9 will also be at the festival. Myka 9 was instrumental in what became known as the California underground scene, centering around the Good Life Cafe in the early 90s.Today, Myka champions his often-imitated, never-duplicated lyrical style around the world. He is known for his often rapid-fire, jazz-influenced, melodic rapping, and often incorporates singing and occasional scatting into his songs. Myka has said of his style, “My rhymes take the direction of a jazz trumpet or sax solo, like Miles or Trane, if I was to rhyme in the same meter as those notes… that’s my concept.”

NLFB is thrilled to welcome back Toronto’s balkan-klezmer, party-punk, superband Lemon Bucket Orkestra, who made a resounding impression with audiences at the festival in 2014. Equal parts exhilarating precision and reckless abandon, LBO’s live shows are a truly immersive experience – ranging from the ecstatic to the cathartic and all points in between.

Also appearing will be Haitian American multi-instrumentalist, cellist, banjo player, singer, and activist Leyla McCalla, out of New Orleans. Known by many as a member of Grammy nominated group Carolina Chocolate Drops, or Our Native Daughters, McCalla takes a deep dive into her Hatian heritage on her remarkable new album Breaking The Thermometer.

And this is just the beginning for Northern Lights 2022! Numerous other artists have been announced, which can be viewed at nlfb.ca/artists. There are also more acts yet to be announced, plus: historical activities, visual arts, artisans and vendors, food offerings, creative family activities, after-hours club shows, and more. It all takes place July 7th-10th in Sudbury, ON. NLFB is always seeking volunteers, sponsors, vendors, and exhibitors to become a part of the festival magic.

Full Festival Passes are currently available at the Early Bird rate for a very limited time. On Monday, March 21 at 5pm, prices will increase and passes for specific days will also go on-sale Saturday, March 19. Passes are available online at nlfb.ca/tickets. For more information visit nlfb.ca or leave a message with the office at (705) 674-5512.