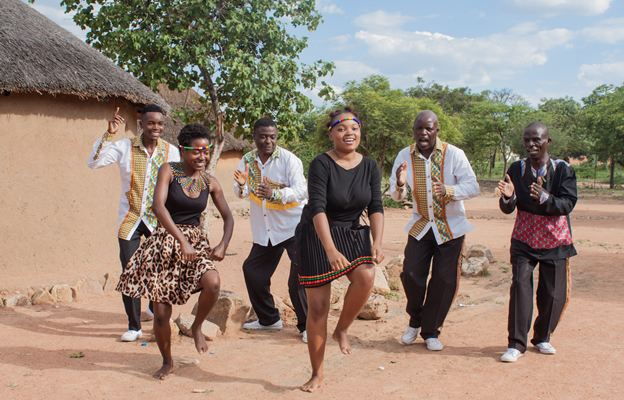 Black Umfolosi are Zimbabwe’s greatest ambassadors, performing music inspired by the traditional song and dance of their native southern Africa, with a beauty and enthusiasm that is unrivalled. The group has become a crowd favourite around the world with audiences of all ages and cultures, due to their natural ability to communicate, and the passion and feeling in their performances.

Formed in 1982, the group takes its name from the Umfolozi Omnyama River in South Africa to where their ancestors can be traced. Since their genesis, the group has continued to grow in strength. Specializing in imbube music, gumboot and Zulu dance, Black Umfolosi have toured extensively throughout the globe. Their performances are energy-driven and completely engaging, mixing a great gentleness of spirit and song with an exuberance in dance. Their trademark harmonies mixed with intricate rhythms, clicking and clapping, are highlighted during their brilliantly choreographed shows – with a full range of movements from subtle to vibrant stomping and leaping! Their famous gumboot dances are a highlight of their shows, showcasing the traditions of southern African mining regions. Their powerful, and most recent album Washabalal’umhlaba, was released in 2020. The title translates as “The Earth Perishes”, an expression of concern regarding climate change and the environment. The group has  represented Zimbabwe at international events such as Expo 1992 in Seville, Spain and the 1994 Commonwealth Games in Victoria, Canada. They have also founded an arts centre in their native home of Zimbabwe, which has become an  incubator for southern African arts, culture, and tradition.

This is a beautiful and rare performance not to be missed. The concert is a ‘dry’, all-ages event, with non-alcoholic beverages and snacks available. Doors are at 7pm, with the show starting around 8pm. Tickets are $35.00 (including HST) and are available at nlfb.ca/tickets, and at the following outlets in Sudbury: The Northern Lights Festival Boréal office (19 Grey St. Suite 3), Jett Landry Music (1119 Lasalle Blvd.) and A&J Home Hardware (469 Bouchard St.). NLFB would like to give special thanks to Collège Boréal for their support of this event. For more information please visit www.nlfb.ca or contact 705-674-5512.