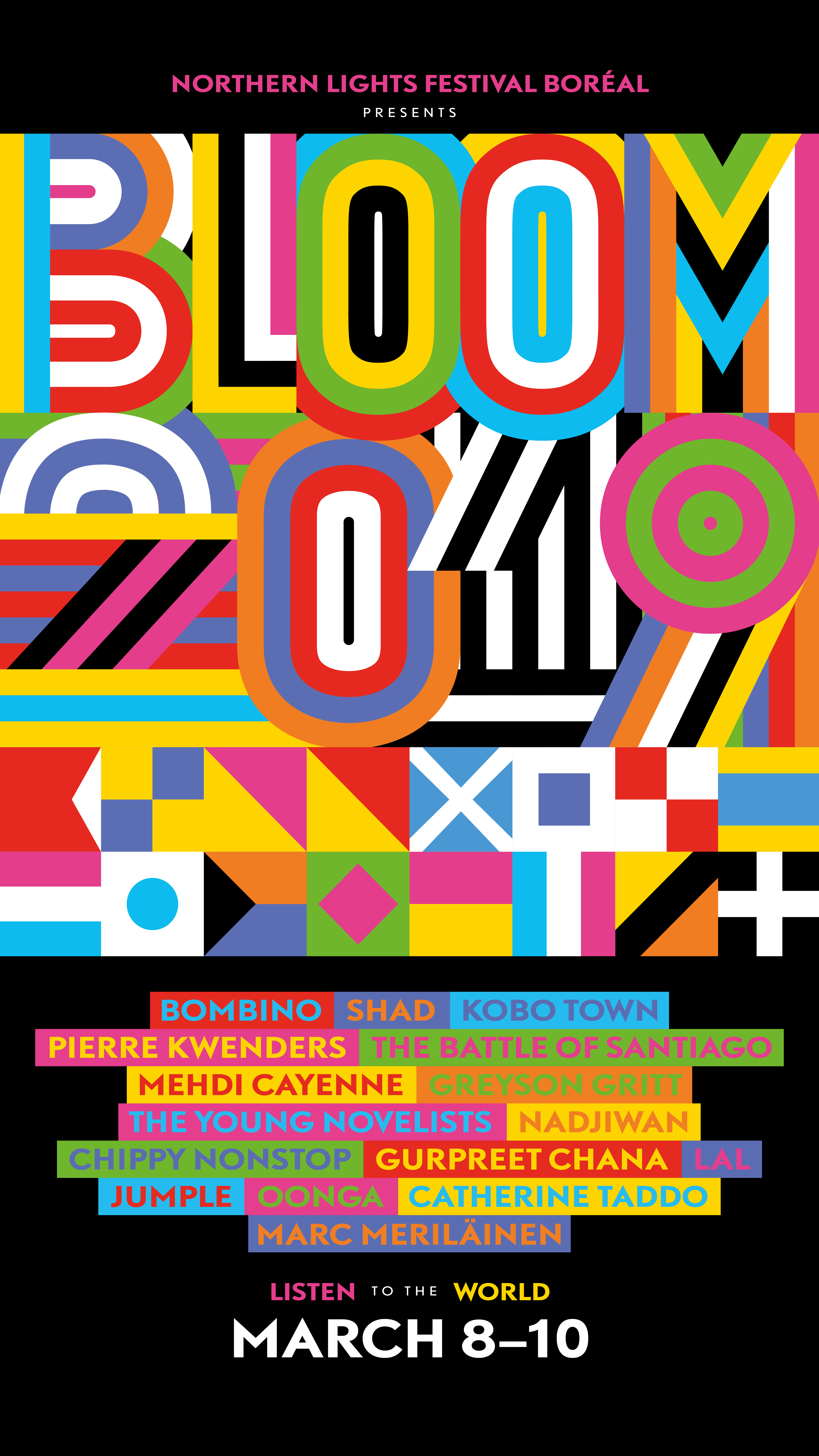 Bloom 2019 is a new multi-venue music festival, set for March 8-10 in downtown Sudbury. It is organized by the team that presents the annual Northern Lights Festival Boréal, one of the country’s longest running. The programming features an exciting blend of music styles, with roots all around the world.

Northern Lights Festival Boréal has already announced West African guitar hero Bombino as a headliner. Since the last announcement, he has become the first Nigerien artist to be Grammy nominated. Just another of many reasons to check out his infectious Tuareg desert blues-rock-groove. Juno nominated hip-hop innovator Shad was also announced as a co-headliner. Both will play The Grand on March 8th, along with The Battle of Santiago. Concert tickets are now available.

Afro-Canadian singer/songwriter Pierre Kwenders will also perform. While Pierre’s music ranges from icy R&B to futuristic hip-hop, his style is rooted in Congolese rumba, the ubiquitous sound of The Democratic Republic of Congo.

Ottawa’s Mehdi Cayenne has an impressive repertoire of post-punk songs that blend world, pop, folk rock and funk in his very particular way. His lyrical (and often theatrical) brand of francophone rock has already blown away Sudbury crowds, and Bloom 2019 is thrilled to welcome him back to the Nickel City.

Bloom 2019 also has a couple of the country’s most progressive DJs, spinning music from around the world. Toronto’s Chippy Nonstop and Montreal’s Oonga will light up the dancefloor with beats drawing from Latin America, Africa, the Caribbean, India, and beyond.

A schedule of show times has now been released, and a few more artists will be announced in the coming weeks.

Bloom 2019 is thrilled to integrate itself into the downtown core. In the spirit of discovery and diversity, Bloom will take place in multiple Sudbury venues including The Grand Theatre, The Townehouse Tavern, Little Montreal, Zig’s, The Parkside Centre and other surprise venues to be announced. Keeping with NLFB’s theme of including something for everyone, Bloom 2019 has scheduled a full weekend of afternoon, evening and late-night programming.

The annual Meltdown Competition is an event where emerging artists from Northern Ontario compete for their chance to play a paid gig at Northern Lights Festival Boréal 2019 (Jul. 4-7). Each artist will have 15 minutes to impress the judges. This is an open audition with a Band and Solo categories. The public is encouraged to drop by and watch. This event is scheduled as part of our new festival, Bloom 2019! This is an excellent opportunity for emerging Northern Ontario artists to gain valuable exposure, and perform their best music in a fun environment! Past winners have included Hello Holiday, Spencer Jose, The Keyframes, and Patricia Cano. Applications are now open.

NLFB will be partnering with downtown restaurants to participate in the “Bloom Dining Club.” Restaurants will provide Bloom Weekend Pass holders with a dine-in discount for the weekend of March 8-10. If restaurants are interested in participating, please contact Izzy at marketing@nlfb.ca.